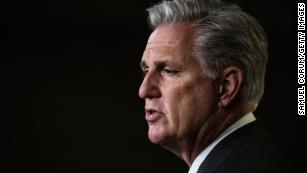 Washington (CNN)A former chief of Washington, DC's police force on Thursday condemned Sen. Ron Johnson after the Wisconsin Republican last week suggested that he would have felt less safe during the January 6 Capitol riot if the protesters supported the Black Lives Matter movement and Antifa instead of being largely White.

"Sen. Johnson is clearly part of the problem," Former DC Police Chief and CNN Law Enforcement Analyst Charles Ramsey told CNN's Jim Sciutto and Poppy Harlow on "Newsroom." "Those comments were racist. Now if you ask him, he'll say, 'Oh, no racial overtones at all.' It's ridiculous. He is part of the problem, and he is not alone."

Appearing on the radio talk show "The Joe Pags Show" last week, Johnson said, "Even though those thousands of people that were marching to the Capitol were trying to pressure people like me to vote the way they wanted me to vote, I knew those were people that love this country, that truly respect law enforcement, would never do anything to break the law, and so I wasn't concerned." He was discussing his recent comments downplaying the danger that day and he has said he "never really felt threatened."

Johnson, who has repeatedly made incendiary comments mischaracterizing the riots, has denied that his remarks about the protesters were racist.

"This isn't about race, this is about riots," he said earlier this week. "It's still pretty shocking that it would take what I consider a completely innocuous comment and turn it into, you know, use the race card on me and say there's some kind of racist comment involved in that there was none."

In the wake of the riot, some conservatives have sought to draw a false equivalency between the violence of January 6 and the unrest that took place over the summer in the wake of several high-profile police killings of Black Americans. Although there were incidents of violence and property destruction last summer, the January riot at the Capitol resulted in five deaths, including a Capitol Police officer, and more than 100 other police officers were injured.

Johnson has also advanced the conspiracy theory that there had been professional provocateurs within the mob at the Capitol. The FBI has said there is no evidence that Antifa or any other groups of leftist instigators were part of the January 6 crowd -- much less were the ones inciting violence -- and nearly a dozen Trump supporters charged in connection with the insurrection have said that such groups weren't involved in the attack. Many of the people arrested identify with far-right groups like the Oath Keepers, not with any groups on the far left.

Ramsey on Thursday said comments such as the ones made by Johnson contribute to recent violence and an uptick in hate crimes in the US.

"It goes beyond just our House and our Senate," he said. "I mean, the rise in hate crimes in this country whether it's directed toward Asian Americans, African Americans, Latinos, it doesn't matter -- we have to take a stand against it. It's just something that can't be tolerated anywhere in this country. But to hear it come from an elected official, a senator, I mean that pretty much says it all."