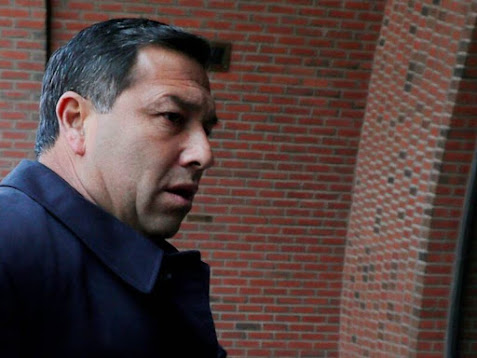 A former UCLA men's soccer coach was sentenced to eight months in prison Friday for taking $200,000 in bribes to get students admitted as athletic recruits, prosecutors said.

The sentence for Jorge Salcedo is one of the longest yet handed down in the sprawling college admissions cheating case uncovered in an FBI probe dubbed "Operation Varsity Blues."

Salcedo, 48, pleaded guilty in July to one count of conspiracy to commit racketeering.

On Thursday, he told a judge that he joined the admissions scheme, which was orchestrated by William "Rick" Singer, because he was desperate for money after buying a house he couldn't afford.

"I am a different man than I was two years ago, and I will never make decisions like this again,” Salcedo said during a hearing held via videoconference, according to The Associated Press.

The broader college admissions scheme resulted in dozens of wealthy parents being charged in March 2019.

Among them were "Desperate Housewives" actor Felicity Huffman and "Full House" actor Lori Loughlin, both of whom pleaded guilty and served prison terms.

Salcedo helped get one student admitted to the University of California, Los Angeles, as a women's soccer recruit with a fake soccer profile.

He sent the profile and other materials to UCLA coaches, and when university compliance officers raised questions, including whether the student actually played soccer, Salcedo made up a fake backstory, the U.S. Attorney's Office for the District of Massachusetts said.

In a second case, Salcedo falsely claimed to have seen the son of another of Singer's clients compete in China, when in fact, the son did not play competitively, prosecutors said. That student was also admitted as a student-athlete.

Salcedo resigned from UCLA in March 2019 after the charges were announced.

He worked with Singer and Ali Khosroshahin, the former head coach of women’s soccer at the University of Southern California, in getting the two students admitted to UCLA, prosecutors said.

Singer, who has also pleaded guilty, has cooperated with investigators, wore a wire in the investigation and provided other materials. He has not yet been sentenced.

The college admissions cheating case has been called the largest ever handled by the Department of Justice.

It involved having ACT and SAT scores corrected in order to falsely inflate those scores, or having children recruited as student-athletes when they did not participate in the sports or did so but not at a competitive level, or both.

The longest sentence handed down so far has been nine months in prison, for former Pimco CEO Douglas Hodge.

Salcedo wrote in a letter to the judge that he failed to live up to the advice he often gave his students, which is that a person's true character is shown when no one is watching.

He wrote that he regrets his actions every day and that the indictment may have saved his life.

"It prevented me from doing any further damage or something that may have been impossible to recover from," Salcedo wrote .